The property is positioned on 41 acres between Reed Hartman Highway and Kenwood Road to the west and east, respectively, and Osborne Boulevard to the south. 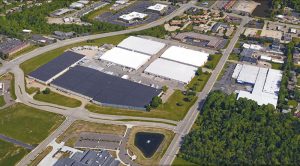 This acquisition makes Neyer the largest private landlord in the Blue Ash market. Prior to the purchase, Neyer was the largest office landlord in Blue Ash, owning more than half a million square feet of office space.

The property is 100% occupied by several tenants including Commonwealth Inc., and Schlage Lock Company.